GESA Strip as Conflict escalates as Hapostinian forces seize control of the TRAC, All of Road 68 Threatened

The deadly conflict in Occupied Gesastine along the Gesa strip along Road 68 in Pasco has threatened to engulf all of Road 68 in Pasco, WA. Hapostinian forces have seized and renamed the TRAC, opening a new front in the fierce war that has raged since 1953 as both HAPO and GESA formed and claimed the Tri-Cities.

The HAPO-GESA conflict has been brewing for years with both belligerents fighting over who has the right to offer low rates, great service and a “small-town-feel” to a community that’s grown to be over 200,000 residents strong.  Each side has escalated in recent years starting with naming rights over the “Gesa Carousel of Dreams,” and ending in a fierce battle to take control over Richland, Kennewick and Pasco.

In 2004, GESA settled the land as they renamed Dust Devil’s Stadium to GESA Stadium. That was their homeland until recently, when HAPO took over the TRAC in 2019. GESA CEO Don Miller says: “We are under occupation. The GESA STRIP was our homeland, and these holy sites are important to us. This is an apartheid situation. I am afraid every day for my children.” 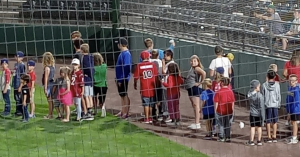 Gesa Stadium is now being used to process Tri-Citizens who just want to go to Dairy Queen or some shit.

Tensions escalated when HAPO chose weekly military exercises all summer long with their LIVE AT FIVE concert series on George Washington way in Richland. “They paraded these mediocre bar bands and got all these food vendors together to show how awesome they were,” said Miller.  “It was a display of force.”

Observers have been noticing a new willingness by the GESA forces that has coincided with an “owl” insignia that has recently been appearing at checkpoints and on the uniforms of soldiers.

HAPO CEO, Dave Schultz states, “The owl is a provocation.  They are terrorists, plain and simple.  We have a right to exist. We had a situation in the 1980s Savings and Loan crisis where our kind of institution was almost forced out of business. By showing the city that we are vibrant and an integral part of the Tri-Cities, we are securing. When they said Never Again, I hope they meant it.” 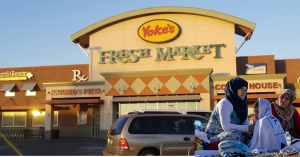 Critics of HAPO’s move are furious about the armed Burden Road road checkpoint systems that every Gestinian has to go through in order to work, get groceries or live. “Children every day have to deal with seeing their parents having all of their possessions rifled through just go to fucking Applebee’s.”

At press time, 13 were kiled and 3 wounded by small arms fire in pockets of Road 68. The pro-HAPO militant group STCU is believed to have been behind the latest round of attacks.

Jen is our most experienced reporter. She carries student loan debt of over $200,000 and a master's degree from a mid-grade land grant. Jen churns out shitty stories for our shitty, small-town paper and then goes home and drinks half a box of wine every night.